Advancing the involvement and leadership of Cornell women since 1990

Advancing the involvement and leadership of Cornell alumni to support women’s issues and gender equality since 1990.

PCCW advances Cornell alumnae and non-binary alumni through leadership and professional growth through multigenerational and global engagement in support of the University’s founding commitment to “any person, any study” and as the first among our peers to admit women as matriculated students.

We achieve this mission by:
Strengthening alumni engagement with Cornell University and fostering alumni, faculty, staff and student leaders
Preparing students for the necessary work of educated global citizens through mentorship and networking
Advancing research, grants and scholarship for gender equity and equality through financial support and scholarship to faculty, students and staff.

Membership is by nomination only, including self-nomination.

PCCW is an inclusive organization that welcomes alumni of all identities, including but not limited to race, ethnic or national origin, citizenship and immigration status, color, sex/gender, pregnancy or pregnancy-related conditions, age, creed, religion, actual or perceived disability (including persons associated with such a person), arrest and/or conviction record, military or veteran status, sexual orientation, gender expression and/or identity, an individual’s genetic information, domestic violence victim status, familial status, marital status, and any other legally protected status committed to furthering its core women-centric mission.

Our mission in action

The President’s Council of Cornell Women (PCCW) was founded in 1990 by then-President Frank H. T. Rhodes with the guiding leadership of trustees Lilyan Affinito ’53 and Patricia Carry Stewart ’50. It has since grown into a group of highly accomplished alumni working to support women’s issues and advance Cornell University’s founding commitment to inclusion with a focus on gender equality in various academic and professional fields, by:

Some might have considered the idea radical. After all, Cornell was a male-dominated Ivy League university that excelled in disciplines that traditionally catered to men. Yet Cornell is also one of the country’s pioneers in coeducation. Following co-founder Ezra Cornell’s famous dictum, “I would found an institution where any person can find instruction in any study,” Cornell admitted two women in 1870, becoming one of the first institutions of higher learning to do so. In the Ivy League, Cornell and Penn were the only truly co-ed members for decades. The rest cordoned off their undergraduate women to Pembroke, Barnard, or Radcliffe, or excluded them altogether.

Guided by Lilyan and Pat’s initial suggestion, Rhodes proposed a council that would identify and engage accomplished Cornell alumnae who would come together to help strengthen women’s roles across the university while also advising him on women’s issues.

In the 1980s, Lilyan and Pat had a growing awareness that women had a great deal to offer universities, yet Cornell was missing out. Many women enjoyed connections with Cornell through friends and classmates while they were in school but dropped their Cornell ties once involved with careers and family. Lilyan and Pat, however, stayed involved with Cornell and became close friends. Career success ultimately led them both to serve on Cornell’s Board of Trustees—Pat in 1967 and Lilyan in 1981—where they served together for 13 years.

During this time, a simmering assault on gender issues had brought on a whole new era for women. When Pat joined the board there was one other woman trustee (Adele Rogers), but by Lilyan’s election in 1981, with backing from Pat, there were 11. The Women’s Movement was well underway, sparked by Betty Friedan’s The Feminine Mystique in 1963, and accomplished professional women were increasing in numbers and visibility.

Yet Lilyan and Pat came up short for names when asked, in the 1970s and 1980s, to recommend alumnae for leadership positions. Periodically, they would learn about a prominent woman who turned out to be a Cornellian and wonder why they hadn’t know of her through Cornell.

When they proposed PCCW as a concept, Pat said, it had “nothing to do with fundraising.” She wanted to find a way to get alumni who support women’s issues and gender equality to see how their areas of expertise could help the university. Lilyan was searching for a way to “expose these alumni to what is going on at Cornell, spark their interest, and demonstrate opportunities to get involved.” These re-engaged alumni, then, “would be good role models for students and faculty.”

Since its founding, PCCW has engaged hundreds of Cornell alumni to support scholarship, campus, life, and women’s issues and gender equality.

The Chairs of PCCW 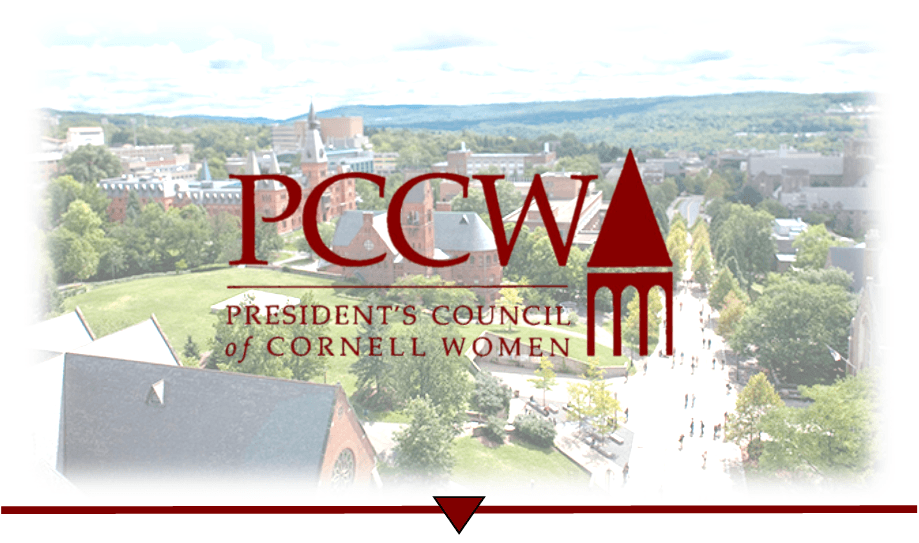 Check out our fact sheet for more details!