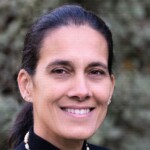 “The pandemic’s disruption of the global economy and the traditional higher educational model provides an opportunity to reimagine a new educational and financial model and learning experience that attracts a diverse group of faculty, students and staff while promoting Cornell’s motto of “…any person… any study.”

I now reside in London with my husband, Brian, and teenage children, Isara and Akash. As a child, I moved between Sweden, Ethiopia, Somalia and Switzerland due to my father’s work with the International Red Cross. This sparked my life-long love affair with travel but also a deep awareness of the wide array of human experiences. I am fluent in Swedish, French and Spanish, and conversational in Thai and Indonesian. When I am not hiking, exploring a new destination, or running, I enjoy cooking and eating.