“This Is Rocket Science” celebrates Cornell in space

Moderator Christopher Crockett speaks to the audience at This is Rocket Science.
By Kate Blackwood April 12, 2017

“Cornellians have flown on the space shuttle. They’ve sent spacecraft to every world in the solar system and built telescopes that have peered clear across the universe,” said science writer Christopher Crockett ’99, MEng ’00 during “This Is Rocket Science: Cornell’s Contributions to Discovering the Universe,” an April 4 event offered by Alumni Affairs and Development (AAD) at the Carnegie Institution for Science in Washington, D.C. “Cornell reaches far, far, far above Cayuga’s waters to explore the universe and understand where we came from and where we are going,” Crockett said.

As Crockett and four panelists, all leaders in burgeoning fields related to space exploration, pointed out during a lively discussion, Cornell alumni, faculty members, and programs have contributed greatly to humankind’s exploration of the universe— beginning with the 1959 founding of the Cornell Center for Astrophysics and Planetary Science and continuing through the successes of the Mars rovers and, most recently, a current Spitzer Space Telescope mission that earlier this year revealed the TRAPPIST-1 solar system.

“Astronomers and planetary scientists spend their days and some of their nights wrestling with the most fundamental questions anyone can ask,” said Crockett, the panel’s moderator.

“Where did we come from, where are we going, and are we alone in the universe?” said Jonathan Lunine, David C. Duncan Professor in the Physical Sciences and Director of the Cornell Center for Astrophysics and Planetary Science. “These are all part of the foundation of moving outward.”

While astronomers like Lunine and his mentor and predecessor, the late professor Carl Sagan, theorize about what could be out in our solar system, galaxy, and beyond, other scientists are working on how to reach those places and preparing for the time when we do.

Catherine Conley PhD ’94, a planetary protection officer at NASA—”You have the coolest job title I have ever heard,” said Crockett—develops protocols both to prevent earth-based life forms from contaminating space and other planets as well as to thwart earth-based organisms that have changed in space from altering populations on earth. She also works to restrain scientists from mistakenly thinking earth-originated life came from somewhere else.

“We don’t want to get confused here,” she said. “If you’re going to look for life on Mars, are you looking for native organisms or something you left behind?”

She credits Cornell, where she studied botany, with the collaborative culture that allowed her eventually to apply her expertise in biology to the realm of space exploration. “That kind of experience at Cornell allowed me, as a post-doc and, subsequently, in my research career at NASA, to build cooperative projects that nobody had thought of before,” she said. 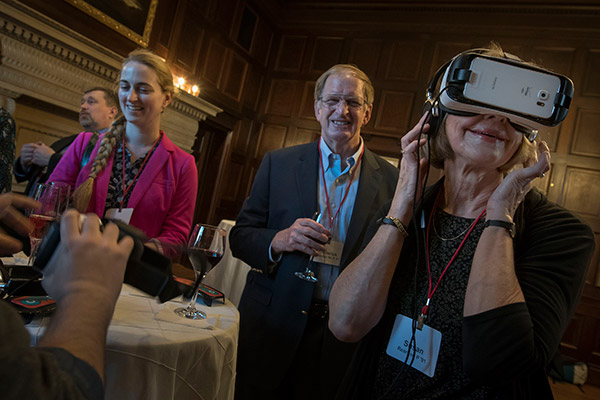 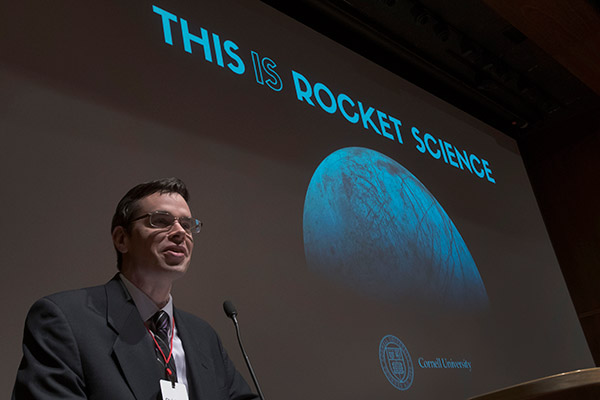 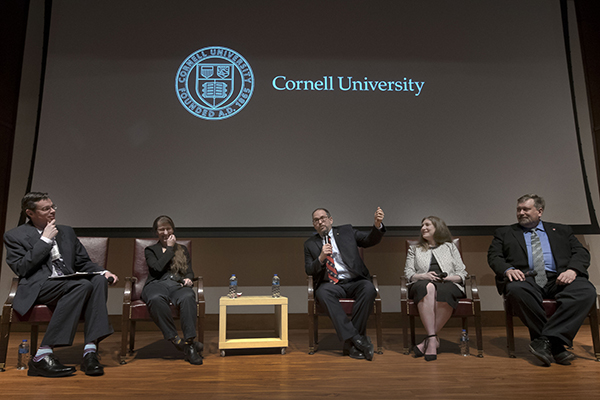 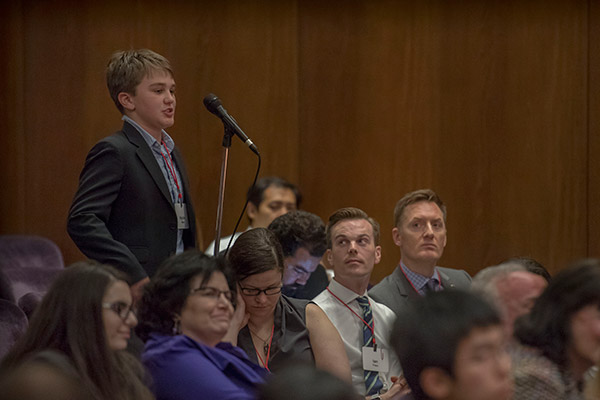 Hayden Martz, son of Raymond Martz ’93 and Jennifer Vingerhoet Martz ’93, asks the panel: “How should I keep up with what NASA is doing?” Panelist Ellen Gertsen ’02 referred Martz to NASA.gov while professor Jonathan Lunine pointed him to astro.cornell.edu, where he and other professors post news about their latest discoveries and collaborations. “Do not hesitate to send us an e-mail,” said Lunine, who, as a high school student, wrote to legendary professor Carl Sagan and received a two-page reply filled with advice for starting his career. “I will answer your questions.” Photo: Johnny Bivera

While scientists discover new worlds and how ours might interact with them, engineers find ways to reach those worlds, said Mason Alan Peck, associate professor of aerospace engineering and systems engineering in the College of Engineering.

“As humans we share a trait: curiosity,” he said. “All this on earth is an infinitesimal fraction of what’s out there. We should go get that stuff.”

To make that possible he and other engineers are developing new technologies, including a water propulsion system that is on schedule to demonstrate within two years and another, which he pulled out of his pocket to show the audience: a one-inch square.

“This weighs about four grams; it’s got solar cells; it’s got an antenna and all the processing you could want; it knows where it is in space,” he said. “What science could you do if you could blanket the solar system with little sensors?”

The future of space exploration depends on the technologies Peck and other engineers are developing, said Ellen Gertsen ’02, a senior research analyst at NASA.

“I think it’s going to change how we do exploration beyond the way we currently do it, sending one probe out with several instruments,” she said. “We’ll gain a very different perspective on the way the solar system looks.”

These expert voices were brought together on one stage to create a program that was uniquely Cornell, noted Claire Stack ’15, coordinator for AAD’s Northeast Corridor.

“Space exploration is an example of Cornell excellence colliding with popular culture and has broad appeal,” said Ilana Carlin, associate director of strategic engagement with the Northeast Corridor office. “Kids and adults love space, and Cornell continues to have some of the most brilliant astronomers and engineers working on exploring the universe.”

A discussion of Cornell’s influence on space exploration was the perfect topic at the right moment, said Terry Horner ’92, PhD ’98, who works in the U.S. Government Accountability Office based in Washington, D.C.

“Cornellians are at the forefront of scientific discovery and, in this town, science policy,” he said. “At a time when we’re having a national conversation about support for science, it’s important to feature Cornell’s contributions to advancing scientific knowledge and improving the human condition.”

Emma Vedock-Gross ’20, a mechanical engineering student, took time during her spring break to attend with her mother, a middle school science teacher.

“I am passionate about science outreach,” said Vedock-Gross, who connected with Chris Crockett after the event. “It was fascinating to speak with someone who writes about science and to discuss the opportunities in that field.” 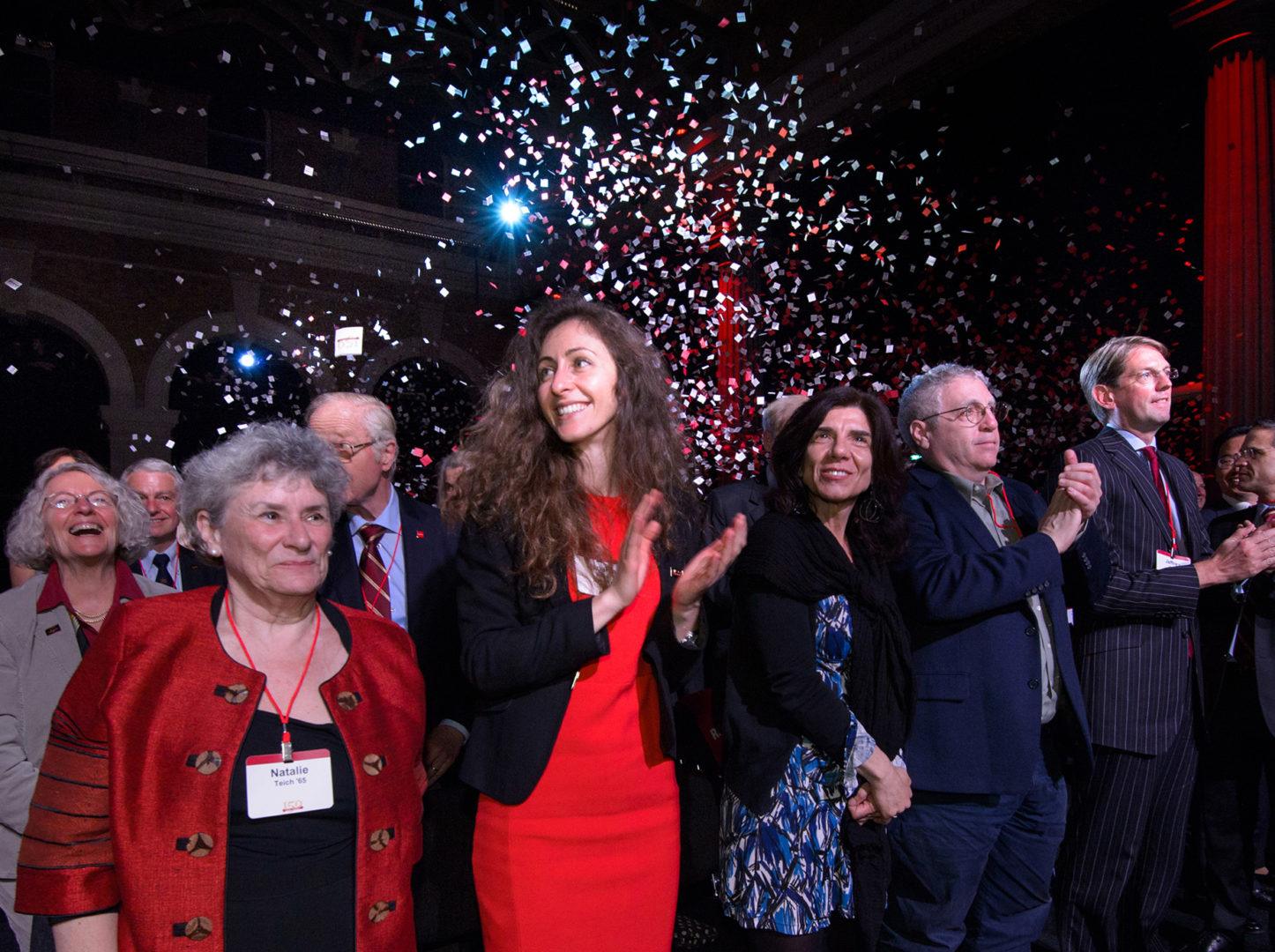 Join events near you

Return to campus or find a Big Red party in your own neighborhood.