An in-depth Q&A with our new alumni-elected trustees

Sheila Wilson Allen '76, DVM '81 and Linda Gadsby '88 begin their four-year terms as alumni-elected on July 1, 2017. Allen is dean emeritus of the University of Georgia College of Veterinary Medicine and currently senior accreditation advisor for the Association of American Veterinary Medical Colleges. Gadsby is vice president and deputy general counsel at Scholastic, Inc. We caught up with these highly engaged Cornell alumnae to learn their thoughts about and aspirations for their new roles.

What are your feelings as you start your terms as alumni-elected trustees?

Allen: I feel a huge sense of responsibility to try to represent the alumni in this capacity, and it is an honor. I’m going into this role with a completely open mind and an open heart. I love Cornell, and I’m excited that I’m going to be able to give back in this way.

Gadsby: I am very excited and humbled to have been elected by my peers. This is such an exciting time for Cornell, and I can’t wait to jump in and learn the issues that are on the table in a more in-depth way, get to know my fellow trustees, and determine how I can best contribute.

How has your past engagement with Cornell prepared you for this role?

Allen: The most relevant role I’ve played is when I served on the Dean’s Advisory Council for the College of Veterinary Medicine. I went to multiple meetings a year and listened to reports from the faculty and, of course, the administration. We provided our input, and I think that was valuable. It was rewarding and fulfilling.

Gadsby: I’ve been an active alumna for over 20 years, which has given me a good overview of the university. Serving as co-chair of the President’s Council of Cornell Women (PCCW) was great preparation for my trustee role in that it gave me the opportunity to meet with Cornell presidents and administrators. We crafted much of our work around the strategic initiatives of the president. My work on the ILR Dean’s Advisory Council has also been helpful in learning the intricacies of individual colleges, which is so important to the student experience.

Who are your leadership role models?

Allen: Abraham Lincoln led the country through a very difficult time and certainly changed the course of history through his leadership. The same thing with Franklin Delano Roosevelt and Eleanor [Roosevelt] for that matter; the two of them individually and collectively, I think, changed the landscape of America and the world. Regarding more recent role models, I have a tremendous amount of respect for the Obamas. They led our country with such integrity and grace. In terms of Cornell University, the presidents who stick out in my mind as being very effective and clearly devoted to Cornell would certainly be President [Frank H. T.] Rhodes and more recently President [Hunter] Rawlings.

Gadsby: My mom is my leadership role model in a couple of ways. She has amazing interpersonal skills and is adept at developing relationships with all types of people, which is so important for a leader. She once walked into a supermarkets and about 15 minutes later walked out with the name of a woman who ended up housing me during a summer internship my junior year at Mobil in Fairfax, Virginia. She’s also a hard worker and a great multi-tasker. I’ve learned a lot from my mom’s leadership style. 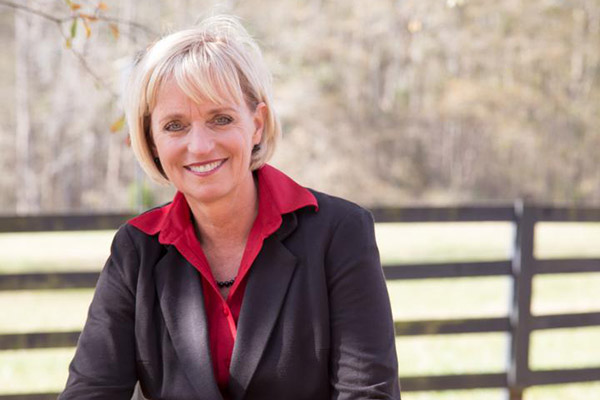 Sheila Wilson Allen ’76, DVM ’81 on her farm in Georgia. Photo: Photo by Whitney Mathisen/University of Georgia College of Veterinary Medicine 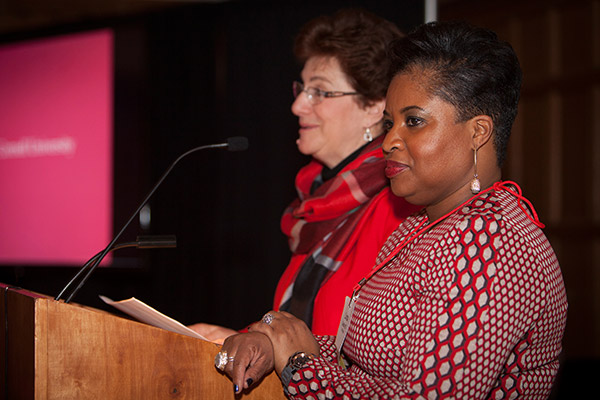 What are the most important issues facing Cornell right now?

Allen: Higher education, in general, is in a very tenuous time right now. We have been transitioning from a system whereby the states support higher education to a large degree and the federal government would provide for student loans and research enterprises. That, I think, is changing. The states are backing away from directly subsidizing publicly supported universities. I have significant concerns about that because the cost of education isn’t going to go down. It’s very concerning to me that the citizenry is not recognizing that higher education is an important public good. I feel strongly that it is and that it should be supported with tax dollars. But that landscape is shifting from the states to the federal government. It’s a landscape we have yet to navigate well.

Gadsby: Financial stewardship and balancing competing interests for limited funds remains a key issue. For example, we need to continue to keep our eye on financial aid to ensure that Cornell remains accessible to all students with the capacity to be successful. We need to have the resources to cover the financial needs of students so that we can continue to have a broadly diverse student body. Another key issue is maintaining our ability to recruit and retain the best faculty possible as we face an increasing number of faculty retirements. Lastly, the strategic integration of the three campuses—Ithaca, Weill Cornell, and Cornell Tech—is going to be important over the next several years. Managing the cultures of the campuses to highlight their distinctive qualities while ensuring that we remain one Cornell will be an exciting challenge.

How do you plan to approach your first year on the board of trustees?

Allen: As with any new position, job number one is to learn, so I’m certainly not going into this role thinking I’m going to change the world. I think my role in the first year is to learn from the other trustees, to get more familiar with the university, to learn what the role of a trustee is, and to engage with my colleagues. I don’t really have a specific agenda at this point other than to do what I can to make sure Cornell continues to value the things that we always have, creating a very diverse and inclusive environment. And that means access and affordability. I think, as trustees, we have to play an important role in making sure financial aid programs are robust enough to ensure that.

Gadsby: I think it’s important to take time to learn the landscape when you begin a new role, so my plan is to do a lot of listening. Cornell is a complex place, and while I know a fair amount, I’m quickly realizing that I’ve barely scratched the surface. I will attend as many committee meetings as possible so that I have a good grasp of the variety of issues the board is tackling. As I learn, I’ll be looking for the areas where my skills and experience can add value to the work of the board. I also plan to spend lots of time getting to know my fellow trustees and developing relationships. I’m really going to throw myself into the role and enjoy the experience!