Before the event, President Martha E. Pollack made a special stop at the Cornell banner, which was owned by Frank Thompson ’24, and later donated by his daughters Carolyn Thompson Brown ’65 and Judith Thompson Hamer ’60. Photo Credit: Chris Kitchen/Cornell Marketing Group
By AAD Staff November 21, 2017

In the National Museum of African American History and Culture in Washington, DC, a weathered Cornell banner hangs behind glass, representing the university as one of the first to welcome African American students. On November 18, the Cornell spirit of “… any person … any study” moved from the museum’s walls to fill its halls: President Martha E. Pollack and more than a thousand alumni, family members, and friends gathered to celebrate the museum and Cornell’s founding principles of inclusion and diversity.

“We can’t be excellent unless we’re diverse,” Pollack said. “I want to reaffirm my own commitment to furthering these inseparable goals of academic greatness and diversity and inclusion.”

Cornell’s connections to the museum are strong and numerous, and Pollack praised the contributions of the university community: Robert F. Smith ’85, a founding donor, who recorded a message for the event; the late Bob Day ’56, an early advocate for the museum’s creation; Rhea Combs MPS ’94, one of its curators; David Skorton, Cornell’s 12th president and now secretary of the Smithsonian Institution; the building’s designers and architects; the Cornell Hip Hop Collection, which has lent some of its pieces; and alumni who have donated artifacts and family heirlooms.

Throughout the event, attendees wandered the museum and interacted with five Cornell faculty experts, from the College of Arts and Sciences, who were stationed in different areas: Kevin Gaines, the W. E. B. Du Bois Professor of Africana Studies; Sandra Elaine Greene, the Stephen ’59 and Madeline ’60 Anbinder Professor of African History; Robert L. Harris Jr., professor emeritus at the Africana Studies and Research Center; Noliwe Rooks, associate professor in the Africana Studies and Research Center and in the Feminist, Gender, and Sexuality Studies program; and Penny Von Eschen, the L. Sanford and Jo Mills Reis Professor of Humanities. 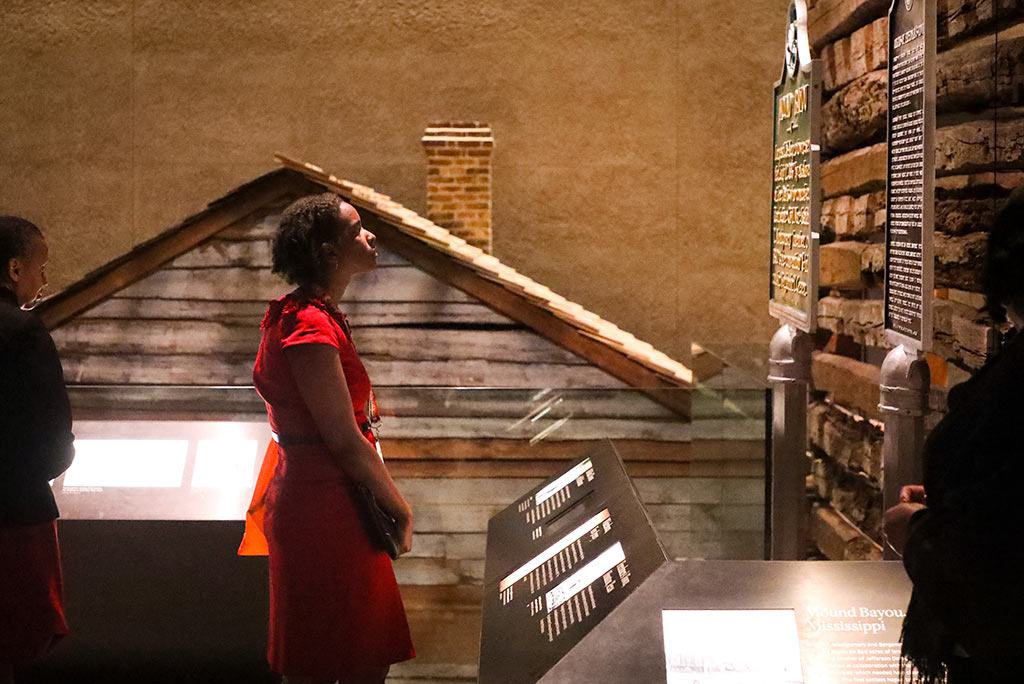 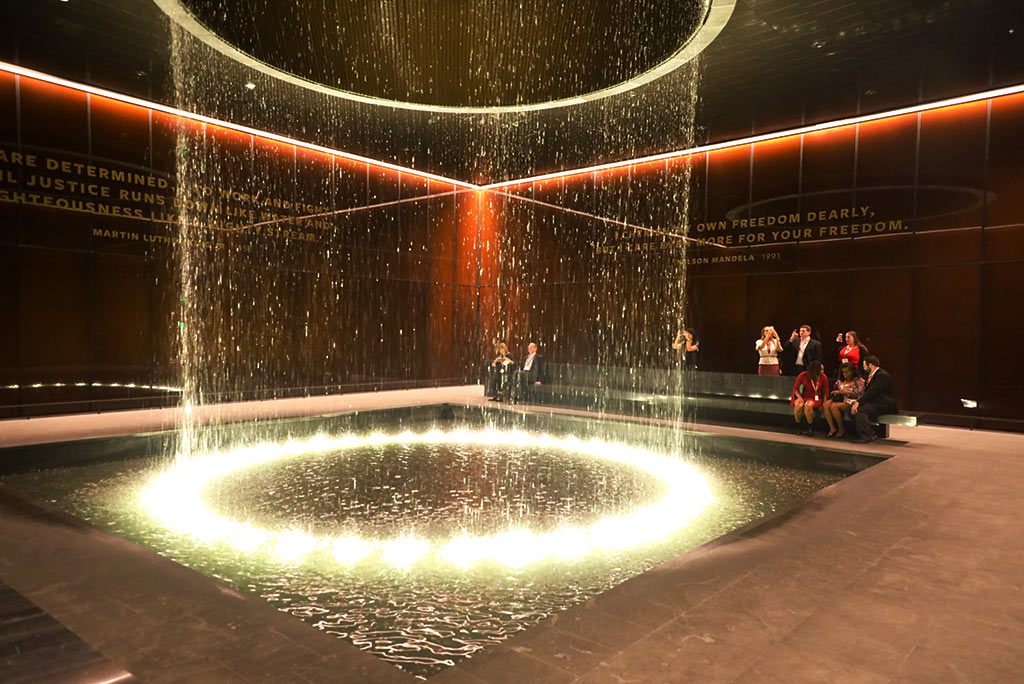 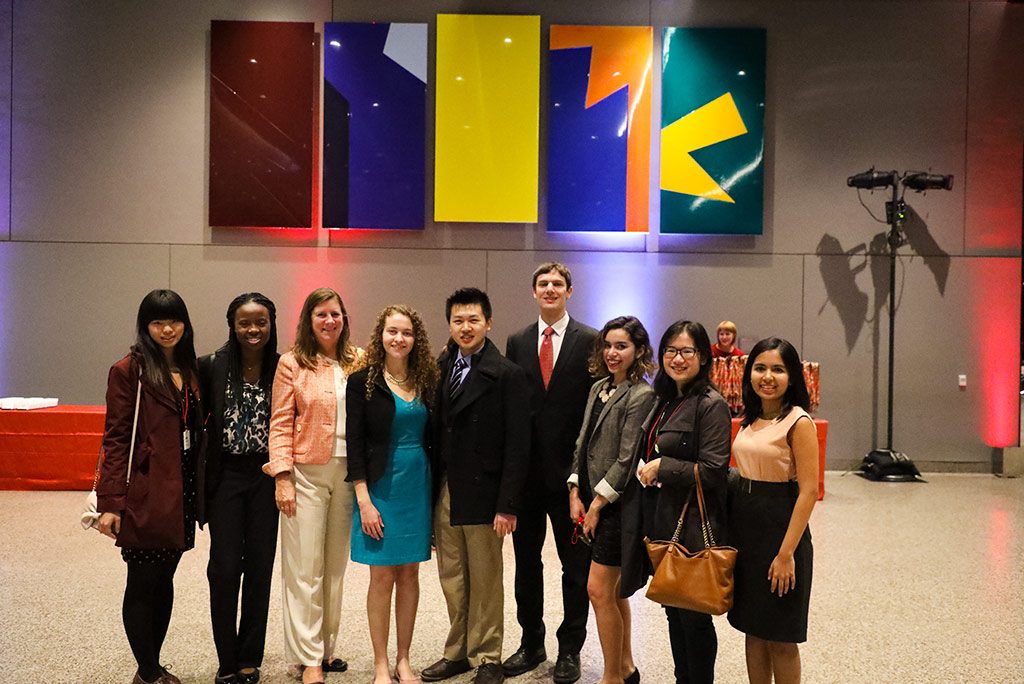 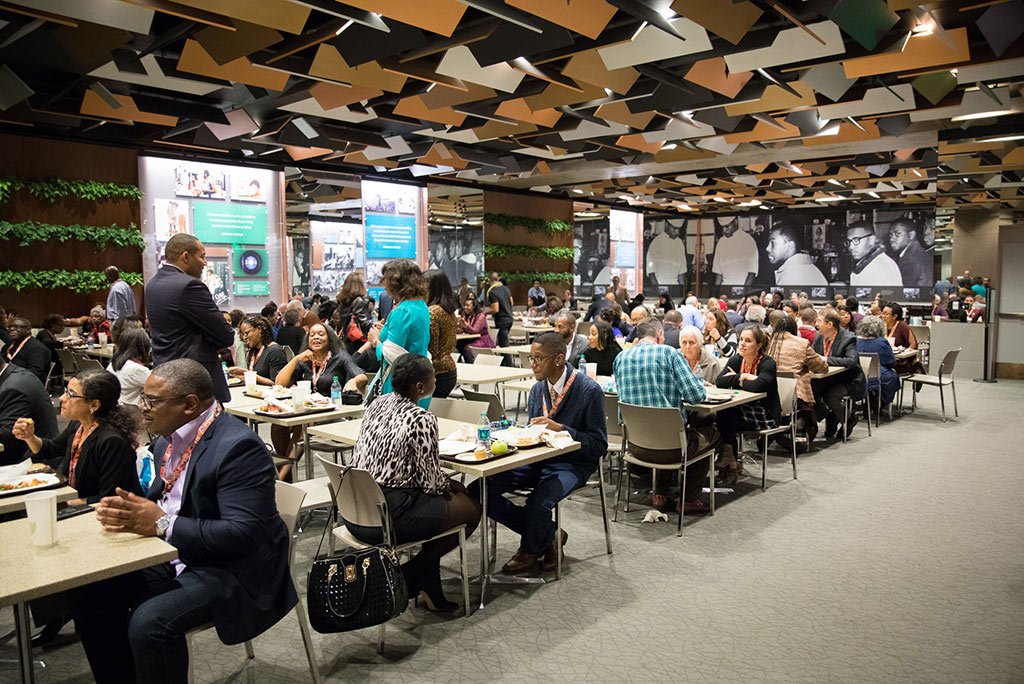 An attraction in itself, the Sweet Home Café was designed by Mindy Magyar ’97. Photo: Chris Kitchen/Cornell Marketing Group 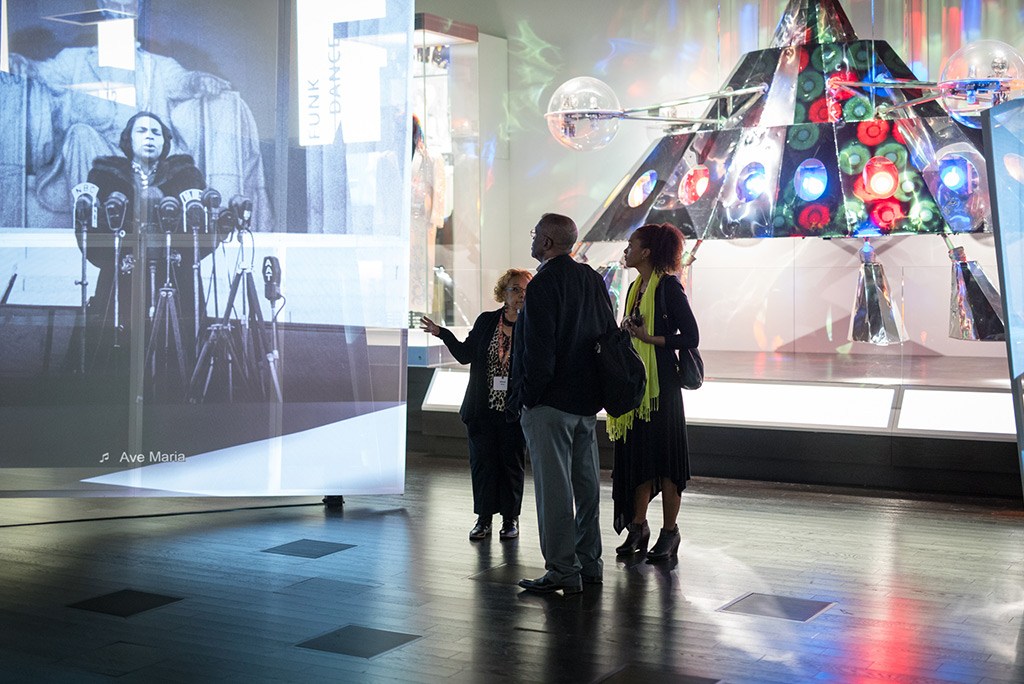 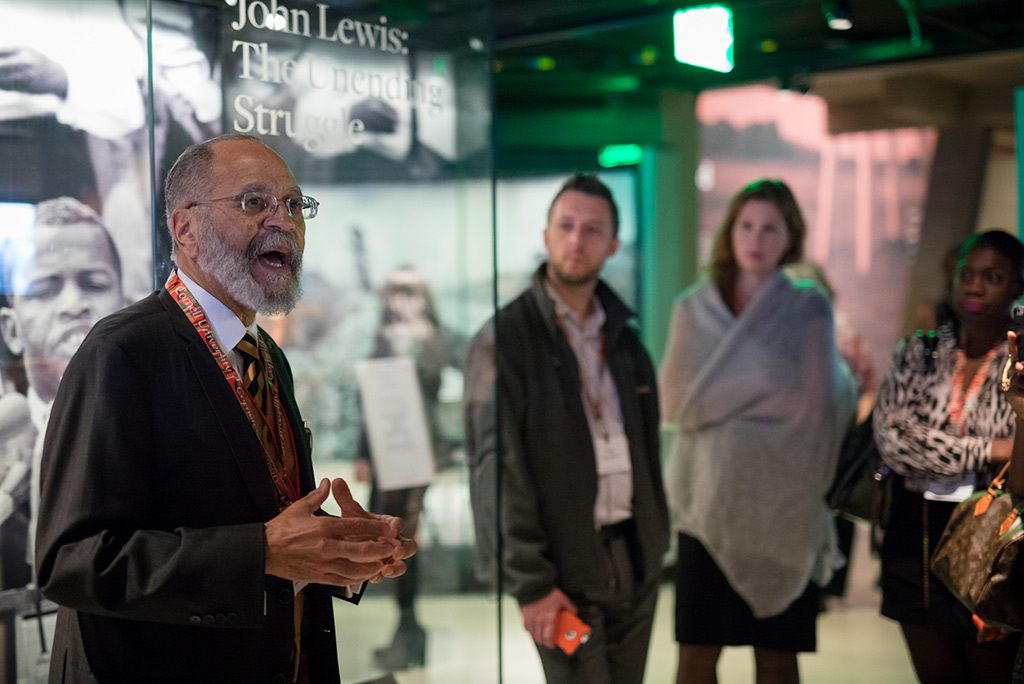 “I really take inspiration from those who came before me, particularly the founders of Alpha Phi Alpha who showed that I, too, can make it at a university like Cornell,” he said.

Two of Elmore’s heroes, Martin Luther King Jr. and Thurgood Marshall, were members of the fraternity, but he was also inspired by a Cornellian who pre-dates it: George Washington Fields, a slave turned lawyer who, although not mentioned by name, is described in the museum as the first African American to graduate from Cornell in 1890. In tribute, Elmore, Andrianne Payson JD ’00, and Laura Wilkinson MBA ’85, JD ’86, supported and spearheaded a scholarship campaign in 2015. “What better person to name it after than this phenomenal individual who, against all odds, went from slavery to be the first African American graduate that we know of from the law school,” he said.

Camille Smith ’00 and her husband, Ryan, brought their two young sons to teach them about both the struggles and the triumphs of African Americans. “Even though there’s still work to do, I want them to understand all the accomplishments,” she said.

Joseph Holland ’78, MA ’79, trustee emeritus, drove with his family from Harlem to see the museum for the first time. Holland came to honor the memory of his father, Jerome H. Holland ’39, MS ’41, the first black football player at Cornell, who became a diplomat, educational leader, and a posthumous recipient of the Presidential Medal of Honor.

“Even though there isn’t any reference to him in the museum, he is a history maker so it’s really important for me to connect to the museum as an expression of my own family’s legacy and contribution to African American history,” he said.

In contrast, Barbara Gales ’74, a Veterans Administration physician and administrator from Spokane, Washington, hopes to discover her family’s connection to African American history. She said she had been trying over the years to trace her roots, with no success.

“It’s difficult for me to connect the dots, and I figured that, if I could at least connect the dots from the foundation with regards to the history of my people, this would shed a beacon of light for me to know and define my essence in society here presently,” she said.

A life member of the Cornell Black Alumni Association who frequently attends alumni events, Gales added, “Cornell has always been like an extended family.”

“There’s strength in diversity, and this weekend is a great concentration of the best of what Cornell does when it partners,” said Terry Horner ’92, PhD ’98.

“One of the key partners is the university itself,” he added. “Without the amazing research, education, and outreach that’s going on on campus we don’t really have something to be proud of.”

Horner is a former board member of the Cornell Gay and Lesbian Alumni Association and the president of the Cornell Club of Washington, DC, which co-sponsored the museum event and collaborated on planning other gatherings throughout the weekend with the Cornell Black Alumni Association, the Cornell Black Lawyers Alumni Network, Cornell Mosaic, and Diversity Alumni Programs. Earlier on Saturday, Cornell Mosaic organized a luncheon where the inaugural Mosaic Medal of Distinction was presented to Lance Collins, the Joseph Silbert Dean of Engineering, for his legacy of boosting diversity at the college.

“I don’t see tonight’s event as just only an African American or black event. I see it very much as a diversity [of people] rallying together, and bringing all allies who support that message to celebrate,” said Ruben Ortega ’13, treasurer for the Cornell Latino Alumni Association and a member of the LGBT community.

The sentiment was shared by Frank Wilkinson ’84, an architect based in New York City and a member of Alpha Phi Alpha and the Cornell Black Alumni Association. The museum is “not a black museum with black things,” he said. “It’s really an American story that’s being told.”

View more pictures from the museum event and other gatherings over the weekend. 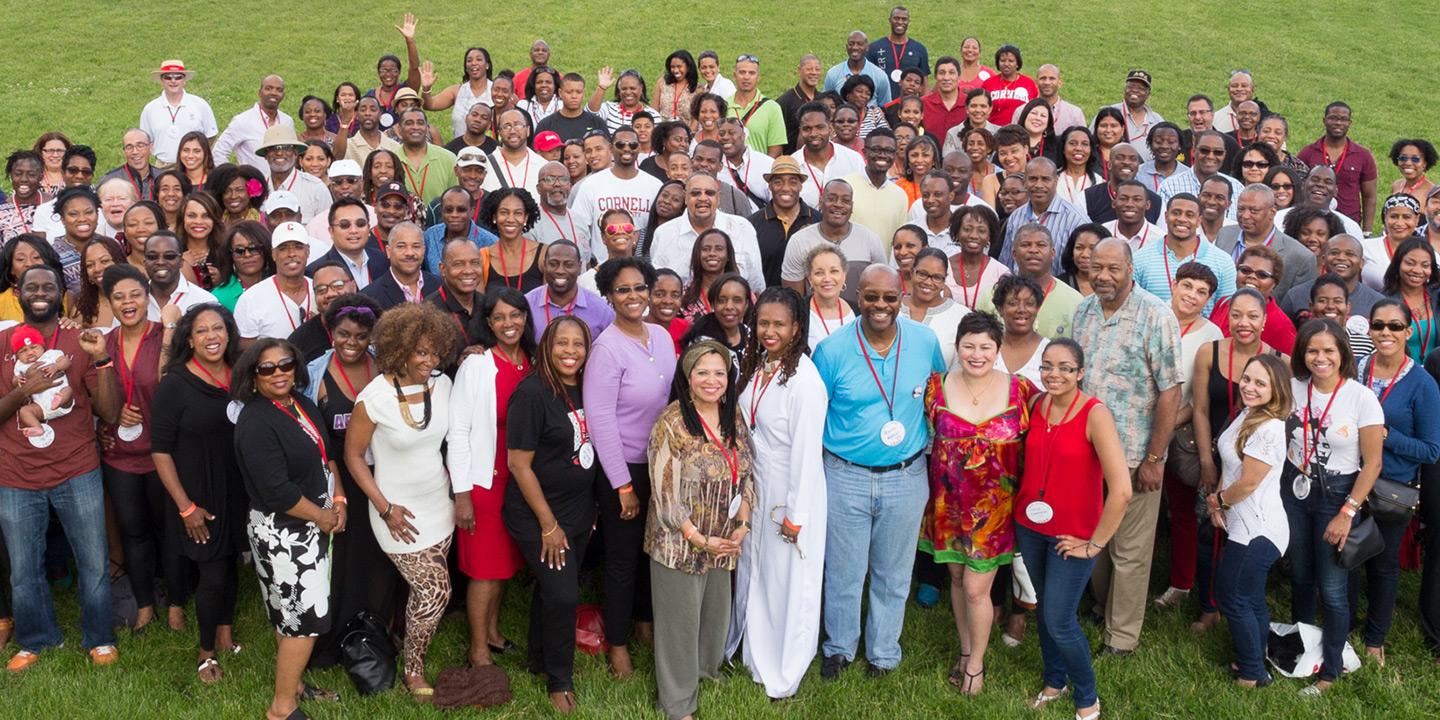 Find your strength in diversity

DIVERSIFY
Members of CBAA and CLAA gather during Reunion 2015