On October 10-11, the university honored U.S. Supreme Court Justice Ruth Bader Ginsburg ’54 as part of the StayHomecoming 2020 celebration. RBG was one of Cornell’s most illustrious alumni, and her work as an advocate for human rights and later as a Justice helped create a more inclusive landscape for women, for LBGTQ+ individuals, and for all Americans. Ginsburg died on September 18.

In her State of the University Address on October 9, Cornell President Martha E. Pollack said that RBG “frequently referred to her formative experiences at Cornell. Here, she learned to write, to treasure the Constitution, and she met her husband,” Martin D. Ginsburg ’53, Pollack said. 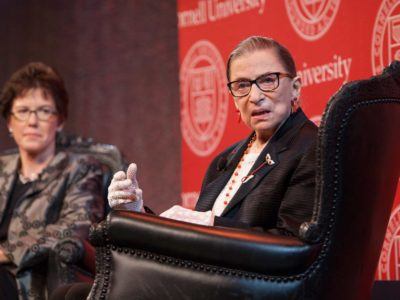 Give to the Ruth Bader ’54 and Martin D. ’53 Ginsburg Program Fund to support lectures that bring distinguished speakers to campus and align with the Ginsburgs’ interests.

In her remarks, President Pollack announced that the university will pay permanent tribute to RBG through both a new program fund and a physical space. Gifts to the Ginsburg Program Fund will support lectures on campus that honor the interests of the Ginsburgs in topics spanning law, music, and the humanities.

Pollack also announced that one of the new residential dormitories on North Campus will be named for RBG and one will be named for Toni Morrison MA ’55, to honor the legacies of these notable Cornellians. Pollack said the buildings will inspire future generations of Cornell students.

I hope our students will be inspired by her leadership and by her legacy. Somewhere out there in the Cornell student community is another Ruth Bader Ginsburg.
—Steve Israel, director of Cornell’s Institute of Politics and Global Affairs

“We wanted to create a memorial that would be seen by and have its doors open to any person at Cornell,” Pollack said, “reminding all of our Cornell students, not just those in a particular field or college, that their path from Cornell can take them anywhere.”

Former Congressman Steve Israel, director of the Institute of Politics and Global Affairs, said of RBG, “Cornell served her well, and she served our country well. I hope our students will be inspired by her leadership and by her legacy. Somewhere out there in the Cornell student community is another Ruth Bader Ginsburg.”

“Ruth Bader Ginsburg’s Big Red Influence on the World,” considered this diminutive alumna’s far-reaching impact across a diversity of fields, in a panel discussion moderated by Israel.

Margaret Washington, Marie Underhill Noll Professor of American History, said that Justice Ginsburg understood that “women’s rights are fundamentally human rights.” Washington explained how RBG used the 14th Amendment—which initially granted equal rights to Black Americans—to argue for sex and gender equality. “It gave everyone born in the U.S. citizenship and equal protection under the law, including women,” she said.

Washington also noted RBG’s advocacy on behalf of immigrants, recalling something RBG famously said about her own family: “’What is the difference between a bookkeeper in New York City’s garment district and a Supreme Court Justice?” One generation.’”

Dorf said that RBG “very effectively” prosecuted this strategy to shine a light on and change laws which treated the sexes unequally. Dorf recalled a conversation with RBG in which she reminded him, in “her nice, but firm tone,” that she had argued many cases in which she represented women, too.

Dorf explained that RBG extended her belief that stereotyping on the basis of sex hurts everyone to apply to gender as well. “She joined all liberal cases conveying rights for LGBTQ+ Americans,” Dorf said.

Denise Green, Associate Professor, Fiber Science and Apparel Design, spoke about RBG’s contributions to women’s empowerment through fashion, namely through her judicial collars. In 2018, Green reached out to the Cornell alumni network to connect with RBG. Members of the Class of 1974 helped make the connection, and RBG readily agreed to display two of her collars in a student-curated exhibit called, “Women Empowered, Fashions from the Front Line.”

Green said that RBG’s collars were a form of “self-expression and gender expression,” which—similar to male neckties and bowties—became a “fashion tradition that telegraphed their gender.” Justice Sandra Day O’Connor, the first woman on the Supreme Court, was also the first to wear a judicial collar. RGB developed the tradition and made it her own, through what Green referred to as “an aesthetic of exaggeration.”

“Her collars were dramatic and attention-grabbing, never subtle, nor demure,” Green said. “She was already a visible minority on the court, and she chose to unapologetically call attention to her gender.”

“RBG was one of the most liberal jurists in American history,” Washington said. “She interpreted cases with human rights and social justice in mind. She viewed the Constitution as inclusive, … (and as a means for) making America what we want it to be,” she added.