One good idea, three minutes to share it, and an enthusiastic audience of more than a hundred—that’s the formula behind Cornell Entrepreneur Network NYC: Pitch Night, June 14, when 10 Cornellian entrepreneurs pitched their start-up ideas at the WeWork space in Bryant Park.

“The goal for this event was to give Cornell entrepreneurs the opportunity to share their exciting companies and ideas with other Cornellians, to take questions, and to receive feedback,” said Amanda Hatcher, senior associate director of engagement initiatives for Cornell Entrepreneur Network (CEN).

“This event gave us the opportunity to test out our revised marketing strategy and hone in the three-minute pitch,” said Thevi Chrzanowski ’97, MBA ’17. She and other co-founders pitched the Ollie Gift Card, a gift savings product for kids. Their pitch paid off; they plan to follow up with an angel investor, a Cornell parent, who approached them to talk further.

“Being able to form partnerships and relationships with other people in the entrepreneurship ecosystem is incredibly important,” said Chad Fong ’19, founder of IvyStart, a live-in incubator for people interested in entrepreneurship, technology, and innovation. The company’s first house, in Ithaca’s Collegetown, is full, and its second, in Brooklyn, is accepting applications.

In addition to practicing his pitch—which, he’s learned, takes a lot of practice—Fong came to the event interested in forming strategic partnerships for his company.

“Whether you are a start-up lawyer or accountant, entrepreneur, marketer, venture capitalist, or anyone interested in helping other entrepreneurs grow their venture, IvyStart would love for you to get involved in our community,” he said.

CEN promotes networking and connecting before, during, and after events through online networking and an open mic opportunity, when participants get 30 seconds to share their stories and goals.

“The hope is that everyone made some connections they could use in the future,” said Hatcher. “By helping our alumni take advantage of the Cornell network, they can connect with each other while also connecting back to the university.” 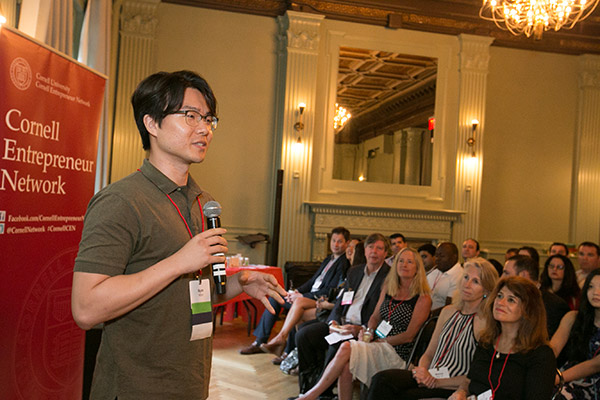 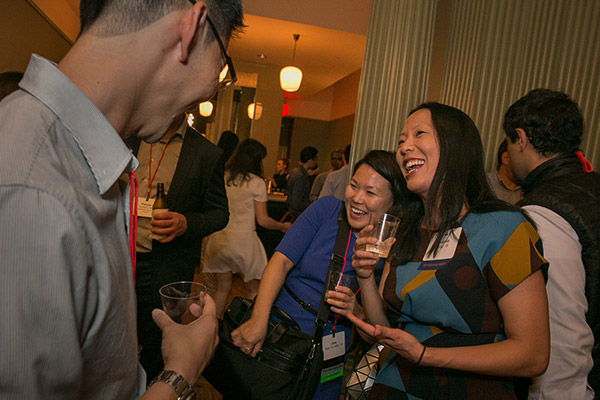 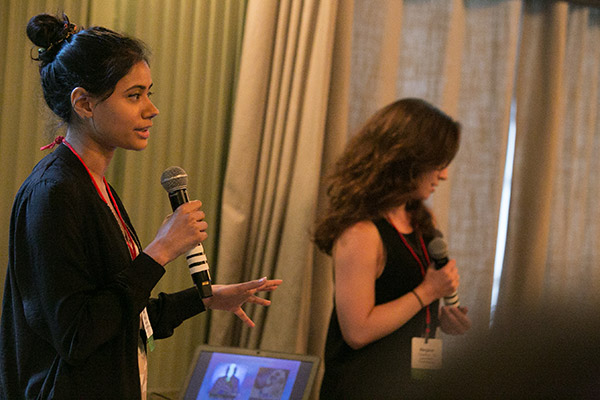 Alisha Vimawala ’13 and Margaret Taormina ’13 talk about their company, Not Your Average Cotton, which offers mint-, citrus-, lavender-, and rose-flavored fluff inspired by the cotton candy carts of the early 1900s. Photo: Photo by Sirin Samman