Frantz Cayo '95 tells a student about his experience in the sports and entertainment industries. Photo Credit: Kate Klein/Staff Photographer
By Kate Blackwood October 5, 2016

What would you tell your undergraduate self today? This question was the challenge for diverse alumni who participated in “Bridging the Gap,” a career networking event held on Saturday, September 24, during Homecoming weekend and organized by the Cornell Association of Class Officers (CACO).

“We usually do a diversity networking event during Homecoming weekend,” said Lauren Myers ’97, vice president of diversity and inclusion for CACO. “We get students and alumni together.”

Held in the Willard Straight Hall Memorial Room, the event featured a panel of six alumni accomplished in entertainment, law, public affairs, and other fields who shared with students the things they wish they’d known while undergraduates at Cornell. 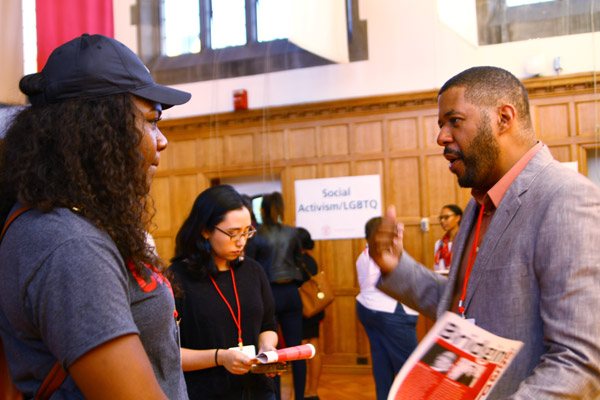 Kelechi Mpamaugo ’20, a student in the College of Architecture, Art, and Planning, learns about creative careers from Roy Clovis ’95, who works in video, television, and film. Photo: Kate Klein/Staff Photographer 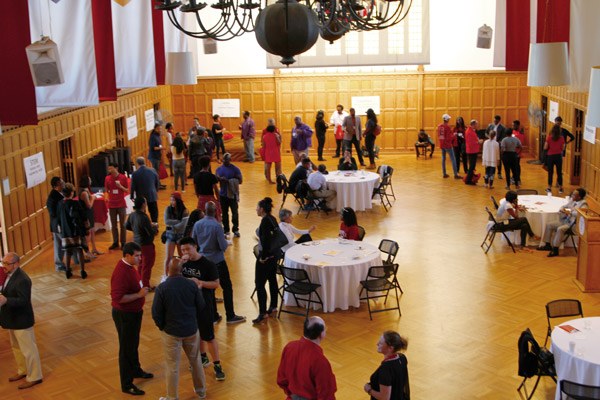 “You never know who or what is going to give you your first opportunity,” Frantz Cayo ’95 told the audience. His first big break in the sports and entertainment industry came from a fellow Cornellian and led to work with ESPN, Red Bull, AfroPunk, and BET.

“I was very intimidated when I was here,” said Theresa Flores ’93, manager of public affairs for Mary Kay Inc., encouraging students to reach out to professors, speak up in class, and share ideas.

“Be open to new things,” said Robert Rosenberg ’88, senior vice president and deputy general counsel for Showtime Networks. “When something new comes along, raise your hand, embrace it.”

Also offering words of career wisdom were Fritz Celestin ’87, a writer, director, and DJ based in New York; Roy Clovis ’95, a producer for WWE Network; and Karen Jaime ’97, assistant professor of Performing and Media Arts and Latina/o Studies at Cornell. Alumni and students then gathered in groups by industry, including community advocacy, entertainment, finance, law, STEM careers, and others. Many impassioned conversations broke out around the room.

The CACO board plans to make the diversity networking event part of Homecoming for years to come.

Get to know CACO!