Senior music lecturer Annie Lewandowski and pioneering bioacoustics researcher Katy Payne '59 are working to reacquaint the public with the creativity of humpback whales, and highlight pressing conservation issues. Their work is supporting a new Google Creative Lab web tool that allows listeners to explore thousands of hours of whale recordings.

Like many music-obsessed teenagers in the 1990s, Annie Lewandowski liked to make mix tapes for her friends. However, most teenagers probably didn’t intersperse pop anthems with whale songs.

“I was talking to a childhood friend recently and she said, ‘Oh Annie, you’ve always been into whale songs. Do you remember those mix tapes you used to make?’” said Lewandowski, senior music lecturer in Cornell’s College of Arts and Sciences. “I had completely forgotten.” 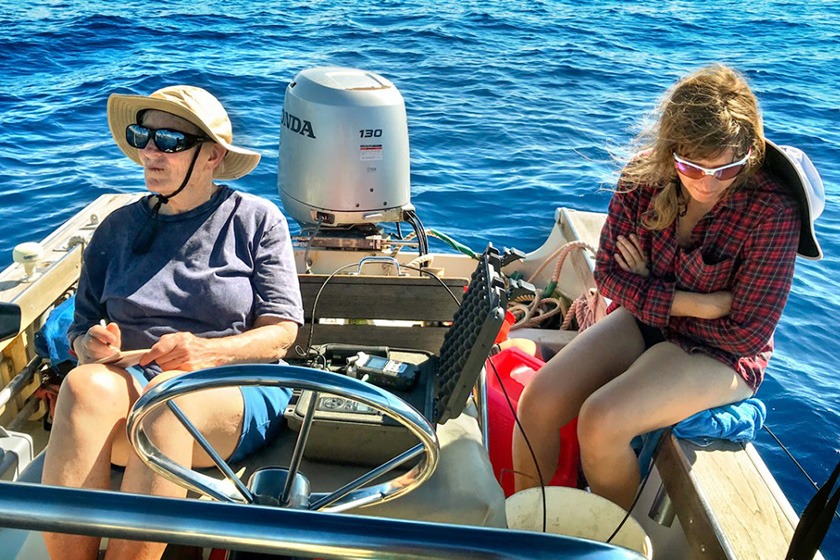 Mix tapes may be a thing of the past, but Lewandowski has found a new way to share her interest in whale songs far and wide. This spring, she worked with Google Creative Lab on a project developing artificial intelligence to recognize patterns in humpback whale songs. The project, Pattern Radio, which debuted June 5, includes a web tool that allows listeners to explore thousands of hours of whale recordings.

The lab invited a handful of researchers and scientists to annotate the web tool to encourage user engagement. As a composer, Lewandowski was able to provide insight into the musical elements of whale song, such as motif development and improvisation. She also tried to raise awareness of pressing conservation issues and impart a sense of awe among listeners.

“They’re amazing songs,” she said, “and they touch people in a profound way.”

When she was a teenager, Lewandowski drew her whale selections from “Songs of the Humpback Whale,” the best-selling 1970 album—co-produced by pioneering bioacoustics researchers Roger Payne, PhD ’61, and Katy Payne ’59—that is credited with introducing the sophisticated, highly structured songs of whales to the general public and helping launch the Save the Whales campaign.

As the 50th anniversary of the album’s release approaches, Lewandowski has teamed up with Katy Payne to reacquaint the public with the beauty and creativity of these songs. They also want to highlight the challenges whales face today, like climate change and noise from oil and gas drilling and maritime shipping, which can be devastating for marine mammals that rely on sound for their survival.

“It’s fascinating reading about the history of the early green movement and the Save the Whales campaign,” Lewandowski said. “Hearing the intelligence, mystery and beauty in whale songs inspired people to get involved. The experience was that powerful.”

In February, Lewandowski and Payne traveled to Hawaii with support from the Atkinson Center for a Sustainable Future’s Rapid Response Fund to record a new selection of whale songs that will be incorporated into a performance and public lecture commemorating the album’s anniversary in spring 2020. Lewandowski plans to design a surround-sound speaker environment in Sage Chapel that recreates the feeling of being in Hawaii during the height of the humpback whales’ winter breeding season, when “the ocean environment is saturated with gorgeous, asynchronous whale song.”

“The speakers will be my instruments,” Lewandowski said. “I’ll be live-mixing the best of these recordings to create a meaningful sonic immersion for the audience.”

‘The whales saved themselves’

Lewandowski and Payne teamed up with the Hawai’i Marine Mammal Consortium and spent six days aboard an 18-foot Boston Whaler, tracking humpback whales and recording their songs with a hydrophone that they dropped 30 meters below the ocean surface. The resulting recordings are a veritable symphony of whale bellows, gurgles, bleeps and screeches, plus the occasional sizzle sound of snapping shrimp.

“I teach classes in songwriting and improvisation,” Lewandowski said, “and one finds a rich relationship between the two in humpback whale song. Within a population, a similar song is sung, yet it’s constantly being tinkered with, from the auditioning of new material to the slight differences in articulation of the individual voice. Some of the innovations are integrated into the larger population’s song, some aren’t. This results in a kind of living and breathing, developing composition.”

The original “Songs of the Humpback Whale” album featured recordings initially made by Navy engineer Frank Watlington and, later, the Paynes. Katy Payne said the quality of Lewandowski’s new recordings tops them all.

“Annie really pays attention,” said Payne, a retired research associate with the Cornell Lab of Ornithology’s Bioacoustics Research Program. “And like her, the Hawai’i Marine Mammal Consortium are organized, wonderful, hardworking, single-minded folks. It was absolutely fantastic to record with them.” 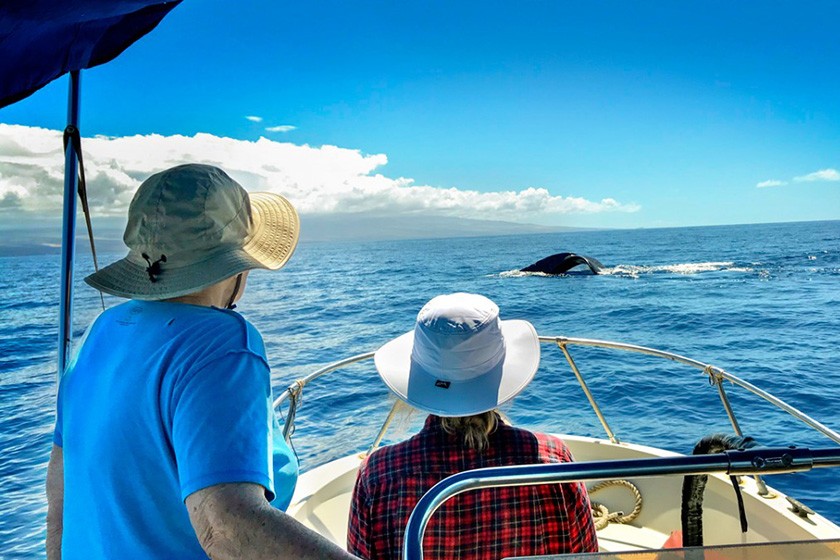 Payne shares with Lewandowski a musical background, having earned her BA with honors in music at Cornell. It was also at Cornell that she found encouragement for her lifelong interest in animal communication. In addition to her groundbreaking research on the evolving structure of whale song, she founded the Elephant Listening Project. But she isn’t finished with whales, yet.

“I think it’s fantastic, when the news is so dire, to have been part of a successful conservation effort,” Payne said. “But the success of the whale project didn’t come from anything people did, except make the whales’ voices available to the public. The whales saved themselves. It’s thrilling to have been a part of that. It could happen again, don’t you think?”

This story was written by David Nutt, managing editor of the Atkinson Center, and also appears in the Cornell Chronicle.